Portland General Electric (NYSE:POR – Get Rating) declared a quarterly dividend on Friday, February 11th, RTT News reports. Investors of record on Friday, March 25th will be given a dividend of 0.43 per share by the utilities provider on Monday, April 18th. This represents a $1.72 annualized dividend and a yield of 3.19%. The ex-dividend date of this dividend is Thursday, March 24th.

Portland General Electric (NYSE:POR – Get Rating) last released its quarterly earnings results on Thursday, February 17th. The utilities provider reported $0.73 EPS for the quarter, missing the Thomson Reuters’ consensus estimate of $0.74 by ($0.01). The company had revenue of $608.00 million during the quarter, compared to analysts’ expectations of $533.12 million. Portland General Electric had a return on equity of 9.11% and a net margin of 10.18%. The company’s revenue was up 9.4% on a year-over-year basis. During the same quarter in the prior year, the business posted $0.57 EPS. On average, research analysts forecast that Portland General Electric will post 2.82 earnings per share for the current fiscal year.

Separately, Zacks Investment Research downgraded shares of Portland General Electric from a “buy” rating to a “sell” rating in a research note on Wednesday, January 26th. Two analysts have rated the stock with a sell rating, three have given a hold rating and one has assigned a buy rating to the company’s stock. Based on data from MarketBeat.com, the company currently has a consensus rating of “Hold” and a consensus target price of $52.75.

Portland General Electric Co engages in the generation, wholesale purchase, transmission, distribution, and retail sale of electricity in the state of Oregon. The firm also sells electricity and natural gas in the wholesale market to utilities, brokers, and power marketers. It also serves residential, commercial and non-residential customers. 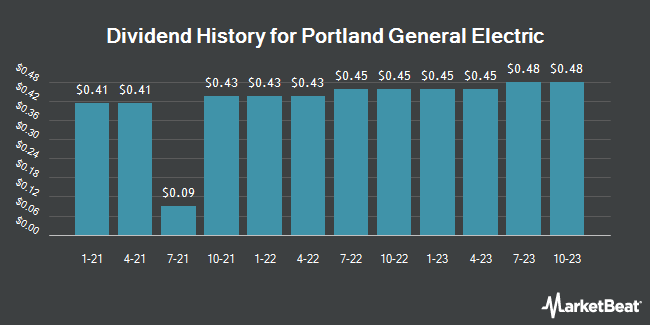