The astronauts returned safely home last weekend, and once again, NASA and SpaceX employees cheered together, celebrating their coordinated accomplishment.

That moment of solidarity, however, came after years of infighting, politicking and mutual distrust, according to current and former employees from NASA and SpaceX.

The space agency, wise from past tragedies that cost astronauts’ lives, saw SpaceX as brash and reckless.

Even after SpaceX began to prove its engineering chops and was awarded multibillion-dollar NASA contracts, cultural divisions kept tensions brewing behind the scenes.

NASA repeatedly signaled that it was more confident in its legacy partner, Boeing (BA), which was developing the Starliner, a spacecraft to rival SpaceX’s Crew Dragon.
As recently as 2016, NASA was planning its schedule around the idea that the Starliner would beat the Crew Dragon to the launch pad. And, as recently as last September, NASA chief Jim Bridenstine and Elon Musk were publicly sparring over whether SpaceX was paying adequate attention to the spacecraft’s development.
But by the new year, Boeing and SpaceX’s race to the launch pad took a clear turn. A Starliner test flight in December was riddled with missteps and left NASA and Boeing officials scrambling to figure out what went wrong. Shortly afterward, SpaceX’s Crew Dragon soared through its final testing milestones, and, in the midst of a pandemic, swiftly prepared for its crowning launch achievement.
NASA officials admitted earlier this month that they had turned a more scrutinizing eye toward SpaceX and its unorthodox ways, while issues with Boeing’s Starliner slipped through the cracks.

“To see NASA step up and say, ‘We should have trusted SpaceX more’ — If you would have played that clip about eight years ago, I would have been flabbergasted,” Reisman said. “It would have been pure science fiction.”

Back in 2005, NASA knew its Space Shuttle program was nearing its end and the space agency would be shifting its focus to a new human spaceflight program, aimed at fulfilling then-President George W. Bush’s directive to return humans to the Moon in 2020.

The space agency, however, also needed to keep the International Space Station, a $100 billion orbiting laboratory, stocked with supplies. And a small faction of NASA employees had a radical idea: Instead of doing the bulk of the work, perhaps NASA could ask private-sector companies to develop new spacecraft and compete for NASA contracts. If the spacecraft proved capable of delivering cargo to the Space Station, then perhaps they could also ask companies to build crew-worthy capsules.

“I think in general it was viewed by [others at] NASA as just a bunch of wacky people doing wacky things,” Marc Timm, a senior manager at NASA who was involved with the commercial program (later named COTS), recalled to a NASA historian. “We were kind of left alone, which I think was another benefit that allowed us to be successful.”

When SpaceX was selected as a COTS program competitor in 2006, it was a four-year-old company with fewer than 100 employees, mostly young engineers, that were trying to launch cheap rockets off the tiny island of Omelek, about 2,300 miles west of Hawaii. They had already blown up one. A common perception at the time was that space technology was probably too complex and expensive for the private sector, and SpaceX’s eccentric CEO, Elon Musk, could join a long list of rich guys who blew their fortune on the impossible.

“We were on our own from our infancy, so we were used to being a bit internally self-centered,” Tim Buzza, a former SpaceX vice president and one of its first employees, later said, according to NASA’s Oral History Project. “I think learning to accept some of that outside help was something that we had to learn.”

Throughout its history, NASA has worked with aerospace contractors to help design, develop, build and test new spacecraft. Boeing and the companies it’s merged with, for example, have worked alongside the space agency on every spaceflight program since Project Mercury began in the 1950s

But the COTS program marked an entirely new blueprint. NASA lent expertise and oversight, but companies were awarded fixed-price contracts. If costs ran high, the contractors would have to find more money elsewhere or work around the problem.

SpaceX ended up spending about $545 million of its own money — on top of NASA’s $475 million COTS award — to build the first Dragon spacecraft, a vehicle designed only to carry cargo. To cut costs, SpaceX wanted to skip some ground tests. Instead of sticking a spacecraft in a bunch of test chambers, as is standard, the company wanted to accept a bit of added risk and put a Dragon cargo capsule on the launch pad.

“The first flight could serve as these big system tests,” SpaceX president Gwynne Shotwell told NASA’s Oral History Project in 2013. “The biggest challenge, I think, that we had in the execution of this was convincing NASA, every step of the way, that though we’re going to do business very differently, we’re going to get it right.”

But not everyone at NASA was put off.

“They were making things in a month that would have taken NASA like a year,” Reisman, the former NASA astronaut, told CNN. He watched the company’s progress while preparing for his second Space Shuttle mission. “We were just amazed.”

After Reisman returned from his mission, STS-132, he left NASA to join the startup.

A year later, in 2012, the first SpaceX Dragon cargo vehicle safely latched onto the International Space Station after launching atop its new Falcon 9 rocket.

SpaceX became impossible to ignore. And the success of the Dragon spacecraft, which still flies routine cargo missions to the ISS, enabled a pro-commercialization movement inside NASA to push forward with a plan to allow SpaceX and other private companies to take over astronaut transportation, too.

After President Barack Obama came into office, his administration asked Congress to back a new program, dubbed Commercial Crew, which would be modeled on the COTS program but would be focused on developing human-rated spacecraft. The Obama Administration also proposed scrapping the Bush-era Moon landing program in 2010.

That idea, however, did not sit well with the space industry establishment or some of NASA’s bankrollers on Capitol Hill.

Republican Senator Richard Shelby of Alabama, whose state is home to a major NASA facility, called the administration’s proposal a “death march” for NASA’s human spaceflight ambitions and an attempt to “coddle the dreams of rocket hobbyists.”

Republicans also wanted to revive the Bush Administration’s Moon landing program and the massive rocket and spacecraft NASA planned to develop for the mission, so eventually a compromise was reached: The Moon program was revived, and Congress agreed to fund the Commercial Crew Program.

But SpaceX’s critics continued to fixate on its failures. The company wanted to figure out how to recover rocket boosters after launch, hoping it would save some cash, but the boosters kept crashing off-target into the ocean. In June 2015, just months after SpaceX received its final Commercial Crew contract, one of its rockets and Dragon spacecraft erupted on its way to the ISS, destroying 4,000 pounds worth of science experiments and supplies. And in late 2016, another SpaceX rocket exploded on the launch pad, destroying a multimillion-dollar satellite.
However, SpaceX also amassed impressive successes. It eventually mastered the art of landing rocket boosters and began regularly navigating them to pinpoint landings on ground pads and seafaring platforms. It launched dozens of flawless missions on rockets that cost roughly a third of those built by legacy US aerospace companies. And, in 2018, it successfully launched the largest operational rocket in the world, known as Falcon Heavy.

Many NASA engineers grew to respect the company and its unorthodox process.

“I like to credit a bunch of people along the way that really kind of stuck their neck out,” Reisman, the NASA-astronaut-turned-SpaceX-engineer, told CNN Business. (Reisman is currently a professor at the University of Southern California and works as a SpaceX consultant.)

But SpaceX never stopped giving talking points to its critics. Musk, the company’s head engineer and public figurehead, attracted a near-constant string of controversies: Smoking marijuana during a podcast interview, running afoul of federal regulators for posting misleading tweets about his electric car company, Tesla (TSLA), and lashing out at his critics on Twitter. And that was just 2018.
NASA administrator Jim Bridenstine publicly aired his frustration with Musk in September, when Crew Dragon was months behind schedule after one of the capsules exploded during a test fire, and Musk was hosting a much-hyped press event about SpaceX’s Mars rocket concept in Texas. Bridenstine tweeted at SpaceX that he expects to “see the same level of enthusiasm focused” on its plans to carry NASA astronauts to the ISS, adding “it’s time to deliver.”
Musk responded in an interview with CNN in which he took a jab at NASA’s long-delayed and over budget Moon rocket. The back-and-forth ended with a joint press conference to publicly bury the hatchet.

But behind the scenes, NASA and SpaceX engineers were already finishing Crew Dragon’s design fixes and preparing to give the spacecraft its final “go for launch.”

In May, days before SpaceX launched its historic crewed mission, she reflected on the evolution of Boeing, the trusted NASA partner that was then undergoing lengthy reviews of its botched test flight, and SpaceX, the underdog that some thought would never get the job done.

“I tell people that there’ll be Harvard Business studies [about these companies],” Lueders, who has business administration and engineering degrees, told CNN. “I think the program was really a catalyst for maturity for both companies.”

Boeing had to learn to work within an aerospace program that didn’t send more money when accounts ran dry. And SpaceX had to grow out of its “Skunkworks” phase, Lueders said, a reference to Lockheed Martin’s internal experimental prototype division.

From SpaceX’s point of view, “the worst thing to be would be to be a major aerospace company,” Lueders said. “They want to be on the leading edge and, sometimes, that’s tough when you’re dealing with government customers.”

Wed Aug 12 , 2020
The latest canceled orders were for the 737 Max, its best-selling jet, which has been grounded since March 2019 following two fatal crashes that killed 346 people. But despite the extended grounding, Boeing didn’t start to see a stream of canceled orders until the Covid-19 pandemic caused a near halt […] 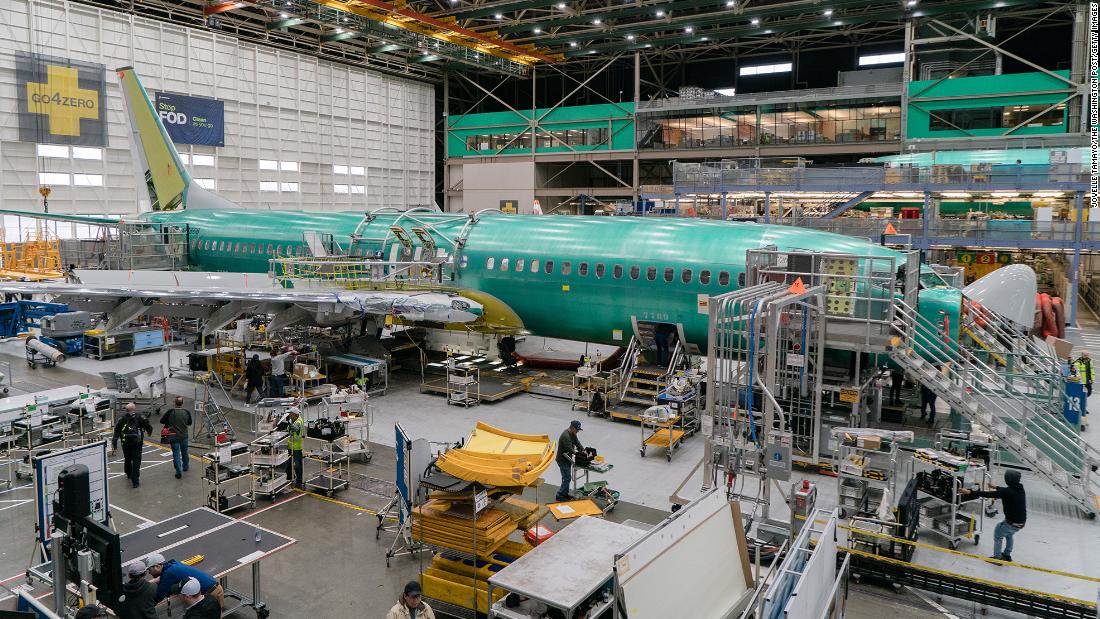